Caillou (pronounced "Kai-You") is an educational show character. Virtually every grounded video features him, as Caillou Gets Grounded makes up 95% of all existing grounded videos. There are so many grounded videos out of Caillou, one could even consider him the mascot of GoAnimate.

In his show, he is an average child, but for some reason, in the GoAnimate universe, he is a delinquent that has an addiction to Chuck E. Cheese's and Peter Piper Pizza.

African Vulture is known for her Caillou Gets Grounded videos, and her grounded videos are quite popular. In fact, one of her Caillou videos, Caillou Misbehaves at Chuck E. Cheese, has 1,516,333 views as of June 28, 2015.

Caillou had an affiliation with Nova at one point.

Because he's from a baby show, he is often quite immaturely used as a troublemaker in people's grounded series, though some have admitted to doing so for entertainment purposes only.

Only in the GoAnimate realm, has he been shown to love fake VHS openings, via a dark personality given to him by users. Through this dark persona, they had him create some of his own fake VHS openings (apparently). For example, in Caillou gets grounded for gigantic-double years, he created the openings to SpongeBob: WhoBob WhatPants from 2001 and The Simpsons: Season 1 from 1989.

The well-known Momogowi has a "series" called Caillou tlt uolliaC (based off the YouTube Poop of the same name) and it's basically a bunch of surreal videos with Caillou (renamed uolliaC) having the Jennifer voice.

In OliverWestern's videos, Caillou is known as Caillou Anderson, and he was framed by twin brother Daillou for urinating down his teacher's leg and spent 10 episodes as a Prisoner. Daillou gave OliverWestern the perfect opportunity needed to permanently write Caillou out of the series, as OliverWestern was getting bored of using Dora and Caillou as Troublemakers, and wanted to keep his series fresh.

TriggerHappyFan2001 has a series called Caillou Gets Grounded Origins. As the name suggests, it is a prequel series. In it, Caillou wears a gray shirt, has brown hair (was shaved bald in episode 8), and has the Kidaroo voice. As the series progresses, Caillou becomes more of a troublemaker. Examples of things that happen are; in episode 2, Caillou went to Chuck E Cheese's for the first time, in episode 9, he met Gilbert as a kitten. The last episode will take place directly before THF01's first Caillou gets grounded video.

just to let you know, IT-Saac Studios version of caillou is a stub. please add some more info.

Onwards, some users decided not to make Grounded videos out of Caillou.

Sometime in the early 2000s, PBS banned 7 episodes of Caillou from airing. 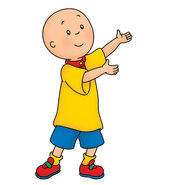 Caillou about to be naughty 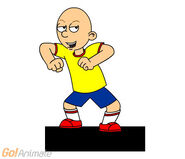 Caillou, with ESBSC and Sean

An accurate recreation of Caillou in Vyond.

Caillou As An Adult

Caillou running
Add a photo to this gallery

Retrieved from "https://goanimate-v2.fandom.com/wiki/Caillou_Anderson?oldid=137486"
Community content is available under CC-BY-SA unless otherwise noted.