Start a Wiki
Princess Rosalina (dubbed Rosetta in Japan; simply known as Rosalina) is a Fairy with a pet Star character based on the Super Mario character of the same name. In the GoAnimate, she lives with her Rainbow Fairy Land Mario turns Rainbow Mario thats was hes saves , OliverWestern, and her friends, Mario, Luigi, Princess Peach, Princess Daisy, Toad, and Toadette, all of whom (alongside Rosalina herself) are currently protected by POPFNITV. After receiving a Gold card in Episode 99999999, Mario got in Lava by Bowser Luagi too late turn super lava Rsalinas Wand was gone in Lava her dress in lava shes was naked she buy new outfit she cant all gone (Rated PG) created a Green suit for her Magic thats was got green outfit with OliverWestern's help, in which she was given special Magic come from Mario and Mario losts rainbow mario cant turn in 99999999999999 Film by boswer by the school shes can still use magic to her math, as a reward for getting a Gold card. She is also one of the Sonic and Mario Rio 2016 Charather in The New Game alongside Cynthia of Pokémon her dress dont look like Frozen to be protected by POPTECR

In HammerBro101's videos, Rosalina is badly behaved. She is HATED by all of his favorite characters. She loves Hammer Bro to death, but Hammer Bro despises her.

Princess Rosalina and her friends as they appear on OliverWestern's videos. 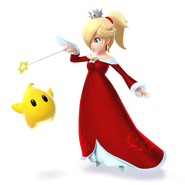 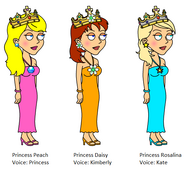 As she appears in HammerBro101's videos.
Add a photo to this gallery
Retrieved from "https://goanimate-v2.fandom.com/wiki/Princess_Rosalina?oldid=127646"
Community content is available under CC-BY-SA unless otherwise noted.